A lot has happened since that PICC line. I think at that time I was so exhausted the blog suffered. Jack was discharged on Christmas Eve. It was truly a Christmas Blessing and I don't think anyone in the family has been more thankful to celebrate Christmas- at home! Since that Christmas Jack has celebrated 2 more Christmas mornings, 3 birthdays, and became a big brother! He is a sweet little boy who is always ready to smile or give a kiss. We have enjoyed the heck out of him these past 3 years!
Although we've overcome many major hurdles in his life, we still have a lot of challenges, Jack isn't walking or talking (he can say some words). Both we feel are his choice not to because he has all the skills to do them.  And the latest challenge- the Fontan. The word makes me a little sick right now- especially since we are one week from surgery. The Fontan is the final surgery of the three phase surgery to re-plumb Jack's heart so he will live only from the left side of his heart. This surgery takes the inferior vena cava (the main vein that runs though your leg) and connects it directly to the pulmonary artery. It should be the final fix and the people who have had the surgeries are doing really well into their 20s and 30s. At those ages some are having rhythmic issues that are easily fixed with meds or pace makers. (This fix is fairly new so the people who have had it are now reaching their 30s and 40s.)
Jack is really starting to show signs that he is ready for the surgery. He has reached the "magical" numbers of 30 pounds and 3 years (which don't feel so magical) and had a heart cath to make sure he is a candidate for the surgery, which he is and I am happy for that! His oxygen stats had always been around 80% but over the last month we have noticed a marked change in Jack. He has been very grumpy and easily turns blue. He is very tired and plays for short periods before having to lay down and play. The 7- 7:30 am wake up has moved to 8-8:30 sometimes 9.  We had to stop therapy several weeks ago because he just didn't have the energy for it anymore.
His surgery is Wednesday, Aug. 6 with a pre-op day on the 5th.  I wanted to ask for prayers as we embark on this journey. Please pray for Jack and his continued health so that there is nothing to stop him from getting the surgery or healing after the surgery. Pray for Dr. Bradley and his staff that they will be ready the morning of surgery. And finally pray for us, that we will find strength in the Lord and trust Him that He will take care of Jack!
Thank you all for that! I will be posting updates as we go along the process! 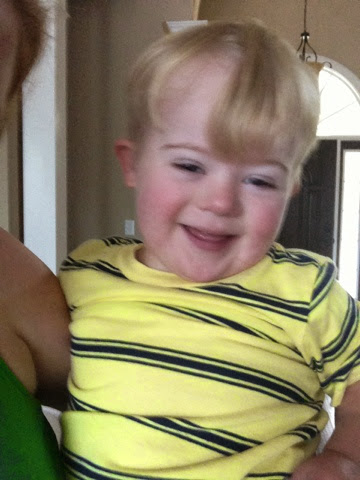